Sure, this is quite an emotional and generalising response, and therefore, it’s of course imprecise and unfair. It’ll probably hit mostly the wrong people (all the more if you are regular readers of this blog) and then I’m sorry – if that’s the case, please just send the link to someone who needs it.

LGBTI people (that’s lesbians, gays, trans people, bisexuals – you get it: everyone who isn’t like you) have tried for years to find out how to best broach the subjects of homophobia, equality and a reappraisal of the past with you, and how to mobilise you. How to achieve less fear and more justice together with you and for Germany to not further disconnect itself in these regards from the rest of the open, liberal world.

For many years already, there’ve been celebrities and politicians who live openly gay lives, and you have gay colleagues, friends and relatives through whom you know that you don’t have to be afraid of us. In addition, there have been awareness campaigns and charm offensives for your benefit as well as furious, frustrated protests. Actions groups, spectacular outings, coming outs, films, books, parents’ organisations, rallies and ad agencies all have tried to finally wake you up. We tried everything: we’ve been well-adjusted, fierce, funny and serious.

We explained, listened, argued, and advocated. We trusted – erroneously – in time. And then, after Ireland legalised same-sex marriage, we hoped that you realised that the time had finally come. But that, too, was wrong. Please don’t tell us now that you need even more time! For at least twenty years, you’ve known everything there is to know about us. You know more than you need to know and more then we care to reveal.

You had at least twenty years to make peace with your resentments. And if you are of the opinion that you don’t have any resentment anymore, I must ask: how many more talk shows do you want to watch until your realisation that we are people just like you finally leads to you making up your minds to also do something for our rights, do something for equal rights?

No, you do not need more time for even more realisations, even more education. We no longer want and no longer can explain you anything else anymore. Everything, really everything has been said already. And it gets on our nerves to tell you time and time again – and admit it, it gets on your nerves to: you actually know it very well that when homos will also be able to marry, nothing at all will happen to your marriages, your children, or society, other than homos also being able to marry. You know it is nonsense when old and so-called neo-conservatives conjure up traditional family values, because you live whichever way you can and want and how you think is right. And because you know that we have the right to do so as well.

You don’t need any further “model gays”. Apropos: how can you actually live with it that you idolise people like [German actor and comedian] Hape Kerkeling or [German fashion designer] Guido Maria Kretschmer while at the same time doing nothing for their freedom to marry whom they love? That freedom exists in almost all of our (western) neighbouring countries and in the Netherlands for ten years already.

Why do you leave it to us LGBTI people to fight for the freedom of your children to be who they are and to grow up in a society with the greatest possible amount of social acceptance and love and the lowest possible amount of homophobia? Why do we have to permanently point out how commonplace, vicious and insidious homophobia is? Do you really not notice it? How’s that even possible?

Aren’t you embarrassed to live in a country that’s so proud of its Vergangenheitsbewältigung, but of all things doesn’t want to acknowledge its past where gays are concerned? Are you aware of the only reason why politicians manage not to compensate victims of the unjust Article 175 – which survived the war and even the Wirtschaftswunder – for the suffering inflicted upon them? It’s because you don’t care.

And now Orlando. Did you not notice that contrary to other significant political leaders, your chancellor, your foreign minister and your federal president couldn’t bring themselves to name the group this attack was aimed at? Namely, us! Didn’t you think it was odd that the Eiffel Tower (and that’s during the European Championship, by the way!), the new World Trade Center, and many other symbolic landmarks around the world were literally turned into rainbow-coloured beacons of our quest for freedom, equality and justice for all, while Germany of all places – yet again! – disconnected itself from showing this type of solidarity and this declaration of our values?

Did that anger you in the way it actually should anger you? What did you do? Did you let your political representatives know how unbearable you find it?

Did you check on Facebook or simply asked one of your LGBTI colleagues, friends or relatives how they felt after Orlando and what’s on their mind right now? And did you think about why?

Did you write to your local newspaper because they hadn’t managed to clearly state what this was, an assassination of lesbians and gays? Did you stop to think about how mean the statement was by chancellor Merkel who said, “We will continue our open-minded and tolerant lives”? Because firstly, it’s inappropriate to use this attack to state the necessary tolerance in our western societies as a given, but on the contrary, it should be scrutinised. And secondly, because plain tolerance really shouldn’t be anymore the only thing you consider worthwhile. And if you still have doubts: did you watch the speech of the US president? How much longer do you need to understand that our country is blatantly ignoring history in the making and has lost touch with one of the most important human rights issues of our time?

And now, where much evidence suggests that the assassin was gay himself, you might think that this is even less of an issue that should concern you, even less than it concerned you before. Because it was a gay person, not a straight person like you, who murdered gays out of hatred. Do you really believe that gays would hate their own gayness without the knowledge, without the instinct, and without the fear that straight people hate them?

The hatred against gays, and the self-hatred of gays against themselves and other gays, can only be overcome if straight people start to fight for a world that’s free, just and free from fear for gay and straight people. Equal rights are a start, a basic prerequisite, and an achievement that’s been fought for, more often than not, by straight people around the world for their respective countries. So what’s stopping you, actually? You owe it not just to us but also to yourselves.

Translation by Matthias Lehmann. Research Project Germany. Every effort has been made to translate this article verbatim. As a result, the wording may appear unusual on some occasions.

Also about the Orlando Shooting in English: 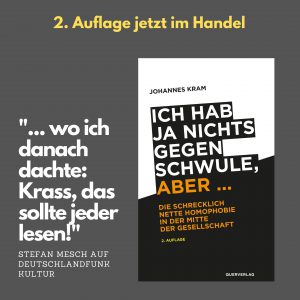 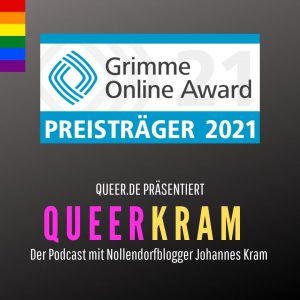 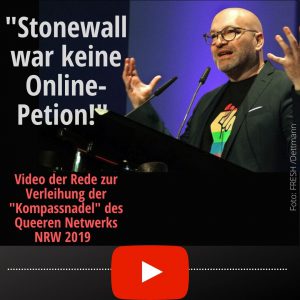 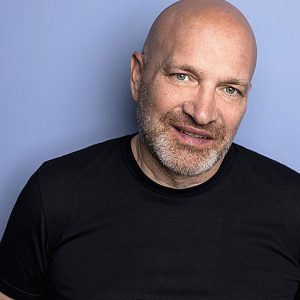